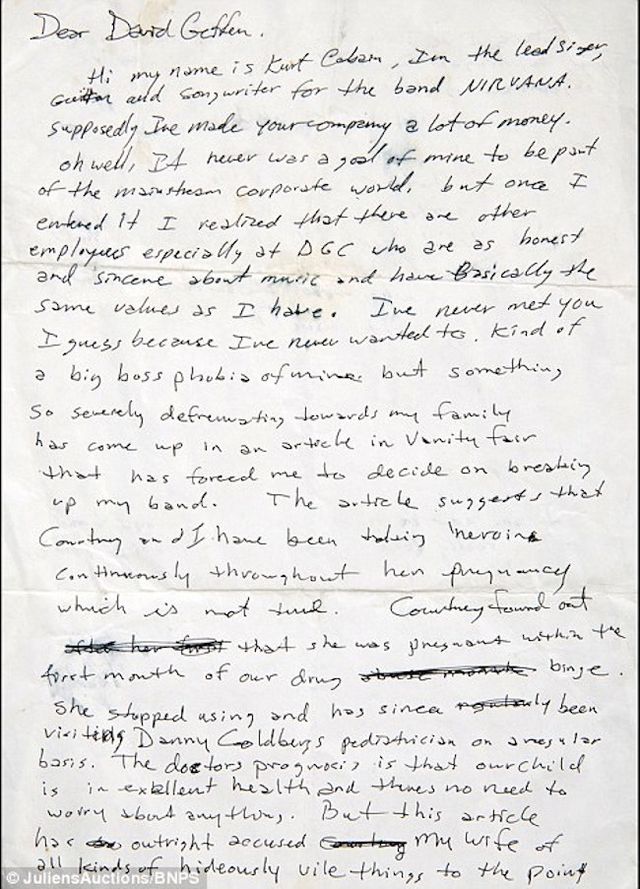 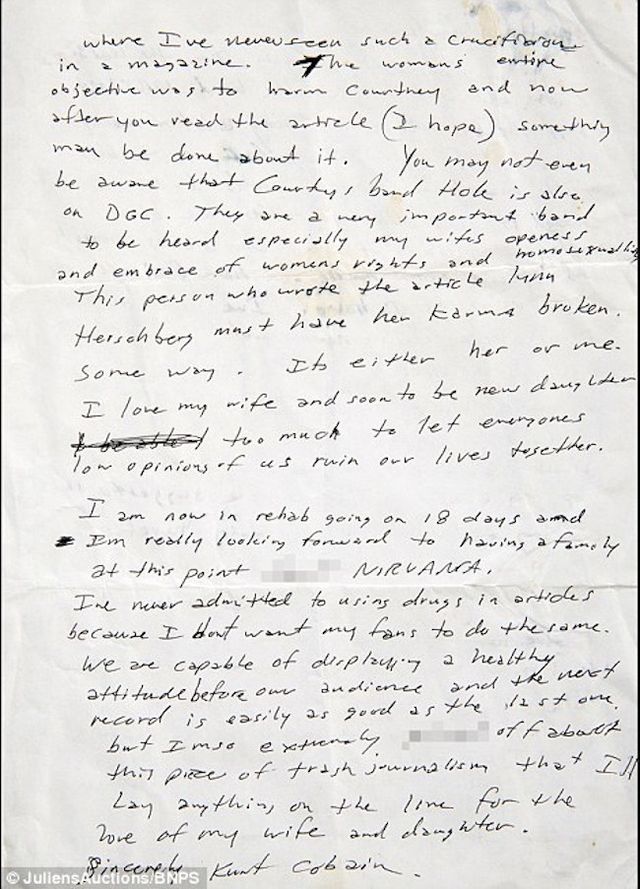 Hi my name is Kurt Cobain, Im the lead singer, guitar, and songwriter for the band NIRVANA. Supposedly, I've made your company a lot of money. Oh well, it never was a goal of mine to be part of the mainstream corporate world, but once I entered it I realized that there are other employees especially at DGC who are as honest and sincere about music and have basically the same values as I have. I've never met you I guess because Ive never wanted to. Kind of a big boss phobia of mine but something so severely defremating [sic] towards my family has come up in an article in Vanity Fair that has forced me to decide on breaking up my band. The article suggests that Courtney and I have been taking heroin continuously throughout her pregnancy which is not true. Courtney found out she was pregnant within the first month of our drug binge. She stopped using and has since been visiting Danny Goldberg's pediatrician on a regular basis. The doctors prognosis is that our child is in excellent health and theres no need to worry about anything. But this article has outright accused my wife of all kinds of hideously vile things to the point where Ive never seen such a crucifixion in a magazine. The woman's entire objective was to harm Courtney and now after you read the article (I hope) something may be done about it. You may not even be aware that Courtney's band Hole is also on DGC. They are a very important band to be heard especially my wife's openness and embrace of women's rights and homosexuality. This person who wrote the article Lynn Hirschberg must have her karma broken. Some way. Its either her or me. I love my wife and soon to be new daughter too much to let everyones low opinions of us ruin our lives together. I am now in rehab going on 18 days and Im really looking forward to having a family at this point fuck NIRVANA. Ive never admitted to using drugs in articles because I don't want my fans to do the same. We are capable of displaying a healthy attitude before our audience and the next record is easily as good as the last one, but Im so extremely pissed off about this piece of trash journalism that I'll lay anything on the line for the love of my wife and daughter.


Obviously Kurt Cobain never left Nirvana since he died in April 5, 1994 and the above letter was written in 1992.

Was it another self-destructive / self-sabotage attempt or just a way to get the head of Lynn Hirschberg?