Snoop Dogg & The Game, One Crip, One Blood, The Reunion 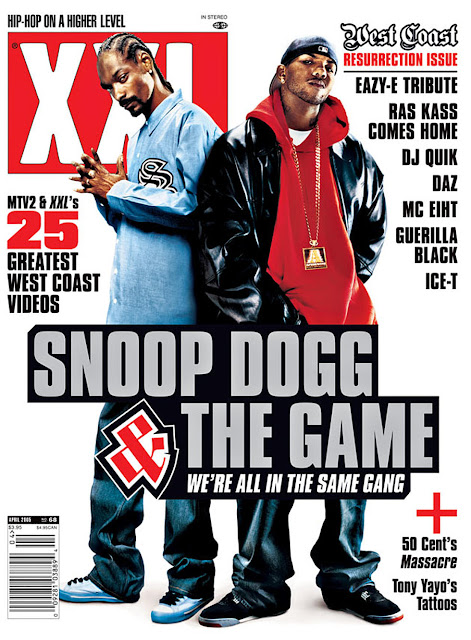 Snoop Dogg & The Game, one Crip, one Blood, united to "end" gang violence and sold albums.

West Coast, it's time to stand up nigga
We goin' unite 'round this motherfucker one time
I'm callin' every real Crip nigga
And every real B-Dogg, to the table right now
Yeah, we goin' push a real line right now
See if y'all with this real gangsta guerrilla shit

Have you ever seen 100, 000 Rip riders from the side
Blue Chuck's, blue rags, gray clouds, blue skies
On the move, can't lose, Hill Street blues
Niggaz gotta pay they dues on the crews or with the uzi spray
These suckers then I cruise, my granny saw it on the news
She shook up, look up and then she put me on the move
I tried to get away, but I couldn't get far
Cause the homies had the loop-loop that night at King Park
And I got into a squab, got caught and went to jail
Straight to the County with no motherfuckin' bail
4800 with this Crippin', oh well
My big homie Boy Blue snatched me by my coattail
He said trip Dogg, ya better get right, Crip right
Eyes open 'cause niggas get stuck on seez-ight
It ain't no motherfuckin' problem, pop-pop, tick-tock
Never flip-flop, 20 Crippin' til I drop

Is I, in the motherfuckin' S-5
With the red bandanna double knotted 'round the rear view
Niggaz see clear through, they know that it's Game
Cherry red Lowenhart's let 'em know that I bang
So bang, like Snoop in "Deep Cover"
I got the seat reclined, fo-five under the white-T, smothered
Dippin' down Green Leaf, I ain't got no enemies
Been shot five times, now I bleed Hennessy
And bang for my niggas locked up, they can't stop us
It ain't a gangsta party 'til we go and dig Pac up
I'm Dr. Martin Luther King with two guns on
Hughey P. Lewis with Air Force One's on
I gang bang but I'm the opposite of Tookie Williams
Red Lambo', red bandana print ceilin'
Me and Snoop got the West Coast locked
Red and blue rag tied in a knot
With all my motherfuckin' homies yellin' out

I ran outta gas in Long Beach, I'm stuck
Ain't no Bloods and all I see is blue Chuck's
Hopped out the '6-trey, nowhere to go
Til' Snoop pulled up in that Pittsburgh Steeler '6-4
We "Just Dippin", one Bloodin' one Crippin'
I'm on that Bulls shit, throwback Scott' Pippen
Moral is, my bandana hangin' from the left side
So if you ain't a Crip or a Blood, just throw up Westside
Yeah cause, we just tippin'
Me and Game doin' things, switchin' lanes, Hurricanes on my feet
Stop, and C-Walk to the beat
Game, take the wheel and turn on 21st Street
Eastside LBC, gun in my hand
It's the turf by the surf but we don't play in the sand
We just, slip and slide out, we Rip and ride out
Let it C known, nigga welcome to the Thunderdome

A very short report about Gangsta Rap most prominent pionners, those who were arrested, shot at, and ultimately killed.


Often linked with the likes of the notorious Bloods and the Crips gangs - gangsta rap, which originated in Los Angeles in the 1980's, rose to become the most lucrative of the hip hop subgenres.

PAFA Paydays Are For Assholes 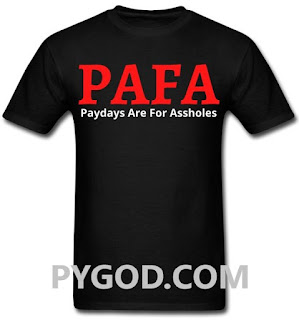 PAFA (Paydays Are For Assholes) which mean fuck work and fuck 9 to 5. PAFA was a patch on the vest of a former outlaw biker gang. 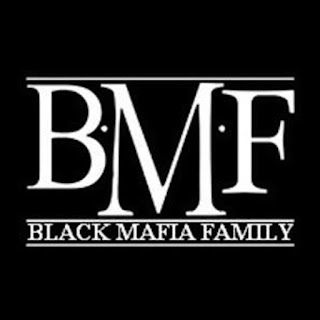 Black Mafia Family (BMF) was a drug trafficking organization who tried to legitimize itself by entering the hip-hop music business, starting a company called BMF Entertainment.


Originally published on: PYGEAR.COM
http://www.pygear.com/2017/09/bmf-big-meech-i-m-a-boss-red-t-shirt.html
Posted by PYGOD at 9:26 AM No comments: